“This book first arose out of a passage in Borges, out of the laughter that shattered, as I read the passage, all the familiar landmarks of my thought -our thought, the thought that bears the stamp of our age and our geography – breaking up all the ordered surfaces and all the planes with which we are accustomed to tame the wild profusion of existing things, and continuing long afterwards to disturb and threaten with collapse our age-old distinction between the Same and the Other. This passage quotes ” a certain chinese encyclopedia” in which it is written that “animals are divided into: (a) belonging to the Emperor, (b) embalmed, (c) tame, (d) sucking pigs, (e) sirens, (f) fabulous, (g) stray dogs, (h) included in the present classification, (i) frenzied, (j) innumerable, (k) drawn with a very fine camel hair brush, (l) et cetera, (m) having just broken the water pitcher, (n) that from a long way off looks like flies.”
– From ‘The Order of Things’ by Michel Foucault

Bruce Gremo and René Beekman have created a multiple computer instrument, “route”, on which they improvise with concrete and synthetic audio and projected video materials, using many digital processing strategies. They control these processes using shakuhachi and flute, EWI (electronic wind instrument), and Wacom tablet. The audio and the visual computers require and generate streams of control data. A third computer allows the two performers to route their respective data streams back and forth to each other, e.g., pitch from the flute to chroma in the image.

The theme of this duo could be , “computer video as musical instrument”, or “how to play the surface of a sound”. From another angle, the players improvise with the sources and destinations of their control data. They play with configurations of control. Imagine a game, unlike chess, where the rules were always being changed. Or imagine a fantastic air traffic controller who improvises with the design of runways and approaches in real time. In sending the control back and forth, there is contention, cooperation, indifference, and even slapstick in the actions of the performers. It is a drama of control. But the punch line is, it is also a process of continuously re-learning how to loose control.

In the book “The Order of Things”, philosopher Michel Foucault ‘cited’ the writer Borges who ‘cited’ a “certain Chinese encyclopedia” which provides a list of animals. In “mutable surface” each list entry is developed as a theater concept. Each of the 14 theaters of this work are expressed as a configuration of control routing.
In organizing a “route” performance around this list, we take an opportunity to draw from out of the route concept, an implicit, constrained, and eager theatricality.
What is this theater about? Lists.

The video instrument was built in Max/MSP using Nato.0+55+3d and looked like this: 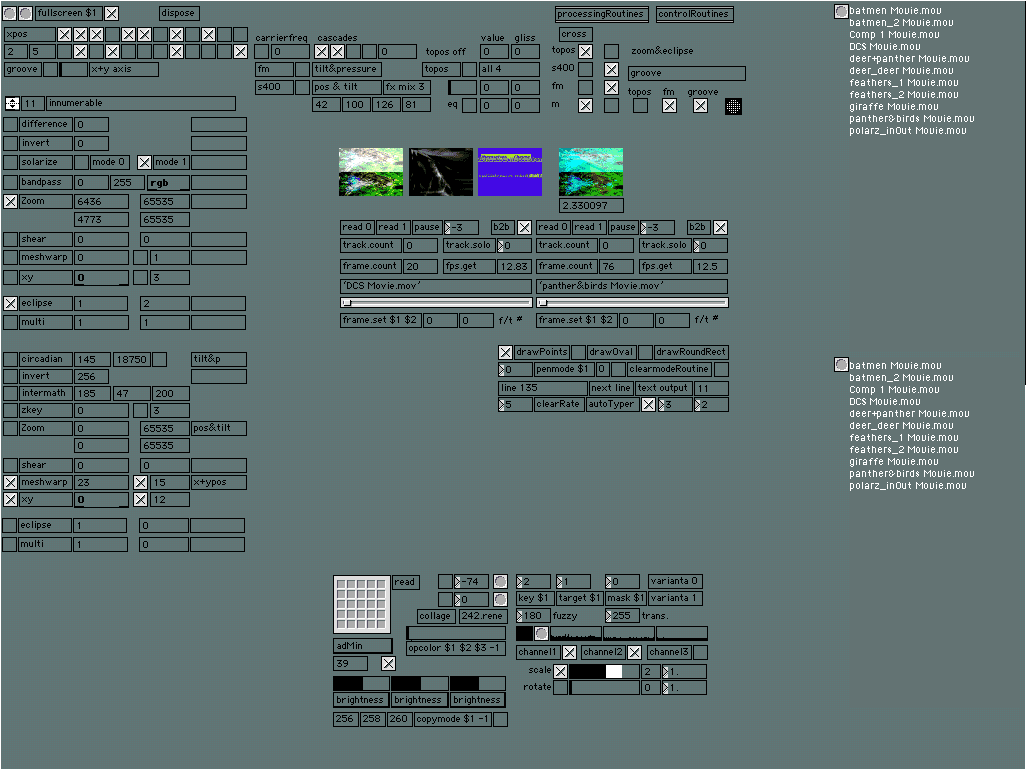